What Role Does Process Serving Play in the U.S. Judicial System? 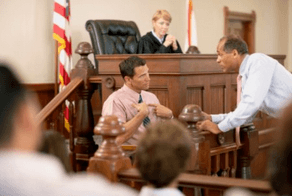 When America was founded and officially broke off from England, it was time to make our own rules. We were able to start from scratch with our country's legal system and create laws that would govern everyone as fairly as possible. While there were a few bumps in the road with this process, we were able to establish a country that has a successful justice system.

In order for our justice system to work, we created the due process of law, which means that every citizen is treated fairly under the judicial system. To ensure every citizen is treated the same, we also established strict rules on how to file lawsuits and other legal documents and how to inform the other party that they are being sued. This is the reason for process serving, which plays a critical role in an American citizen's due process.

What Does A Process Server Do?

Anytime you take legal action and file a lawsuit, the writ, summons, or other important court documents must be served to the other party. Both parties must be notified of any action that is taken against them under the law. The party must have the complaints, subpoenas, divorce papers, order to show cause, or any other action document served to them. This allows both sides to prepare their arguments and have a fair chance at representing themselves in court.

Process serving is critical during any type of lawsuit or dispute because if the documents are not served properly, the party will not know what action is being brought against them, who is involved with the dispute, what date to respond by, and the dates to appear in court. Once a process server presents the legal documents in person, neither party can use the ignorance excuse in court. The legal document will also include which jurisdiction the dispute will be held in. This is vital in lawsuits because each state, county, and city have different laws and will apply their laws differently depending on the case. One party can argue that the lawsuit should be disputed in a different court or jurisdiction once they receive the information.

Strict rules apply to process serving, and each state handles it differently. Because serving a defendant can be complicated, lawyers and other legal professionals will hire a process server to deliver legal documents. Sometimes multiple process servers are necessary to track down elusive individuals involved in the legal proceeding.

If you're in need of a professional process server, Same Day Process is at your service. We know your time is critical, and we aim to serve legal documents within the same day. Contact us today to learn more!

What is Creditor Harassment?

July 18, 2022
Blog originally published on August 1, 2016. Updated on July 18, 2022. The phone rings for the fifth time that morning and you cringe as you glance at the caller ID. It’s a debt collector again, and although you’ve already told this...
Read More...

How to Avoid Scammer Process Servers

June 30 2016
When it comes to serving legal documents there are plenty of concerns that you should be aware of. In a world where people are always trying to get more than they deserve, there are now more process server scams than ever before. There are some tips...
Read More...

How to Become a Skip Tracer

June 3 2016
In the legal field, skip tracing is the attempted location of a fugitive who cannot be located by using their home address, usual hangouts, or other traditional means. The term comes from 'skip', meaning someone who has 'skipped...
Read More...

If An Entity Terminates, Can its Registered Agent Still Be Served With Process?

May 27 2016
Whether you are an individual or part of an entity, being served with process means you are served with documentation for legal proceedings. Service of process is when one party to a lawsuit or other legal action gives an appropriate...
Read More...

What's the Difference Between A Mobile Notary and A Process Server?

October 7, 2022
Both are neutral third parties essential in providing proof and resolving court cases in a legal manner. But what are the different responsibilities of process serving and notary services? Let's find out!
Read More...

April 4 2016
No matter how you view it, social media has changed the world. It allows individuals to express themselves in a much different way than the past. The main difference, everything that happens on the internet, stays on the internet. And though it may...
Read More...

What Is a Mobile Notary?

March 1 2016
When a notary republic travels to meet their clients, this is what is referred to as a mobile notary. On a daily basis, it’s typical for a mobile notary to travel to up to eight different locations to notarize one signature, or perform a loan...
Read More...

Why Does the Judicial System Require the Serving of Court Documents?

January 19 2016
The U.S. Judicial System requires that defendants must be served court documents that compel their appearance in court. This is called process serving, and it can be a lengthy process if the defendant in question is hard to find. No one...
Read More...

How Can Real Estate Companies Benefit from Hiring A Skilled Process Server?

November 16, 2022
Blog originally published on January 2, 2016. Updated on November 16, 2022. At Same Day Process Service, we provide services to a diverse range of clients across many different industries. We pride ourselves on being able to serve any type of...
Read More...

The Signs of a Trustworthy Process Server

What Methods Do Process Servers Use to Find Evasive Subjects?

What Services Do Mobile Notaries Provide?

What Duties Does a Process Server Perform?

June 21, 2022
What does a process server do? Take a closer look at how we use skip tracing to serve legal documents to people across the nation.
Read More...
Page: 12345 - All